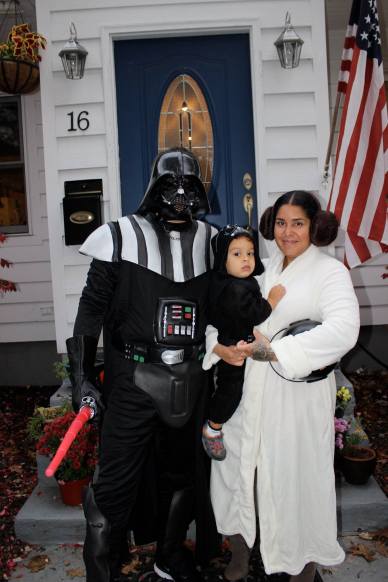 Halloween is perfectly magical.  It comes around one of my favorite seasons of the year.  Something about the crisp air and the smell of the autumnal leaves reminds me of school as a kid.  My son, now 3, adores Halloween. Last year he was dress as the Hulk and I was Black Widow, both from the Avengers. Two years ago he was Yoda and I was Princess Leia from Star Wars.  Pretty great times.

Halloween wasn’t always so much fun for me growing up.  When I was about five years old, my family converted from Catholicism to Born-again Christians (look up its differences).  Being a born-again christian basically sucked the fun out of everything in life. Secular music now became the devil’s music.  TV shows were now a form of brainwash to get you to forget about Jesus. But one of the things that broke my heart as a child was not being able to celebrate Halloween.  Yes, as a born again Christian I was not allowed to celebrate Halloween or as they called it “the Devil’s Birthday”.   One Halloween I  was pulled out of class and sent to the principle’s office. The reason: The second grade Halloween Parade.  How can a religion twist something so innocent and simple?  I felt deprived and like an outsider among my friends.  I really wanted to be like the “cool kids” in school with their costumes and buckets for candy.  I would have settled for any costume.  I wouldn’t have been picky. But there I was sitting in the principal’s office with a cupcake to make me feel like I wasn’t being left out.  It sucked.

It only got weirder as I got older.  We eventually switched churches.  This church was a bit more liberal but still slightly on the crazy side and really into christian rock (listen to some POD when you get a chance). Halloween was still considered the devil’s holiday.  But instead of banning it, they held their own costume party at church.  We played games there and had candy and even got to wear a “bible-themed” costume.  I was the dressed as the Virgin Mary.  I’m sure God was pleased with my attire on the Devil’s birthday.

The origin of Christianity, the bible, and many christian beliefs come from places that Christians don’t even know about. I am glad that I have educated myself enough to know that there is  no such thing as the Devil’s birthday and that Halloween is a holiday created by Christians themselves.  As an intelligent and non-God fearing adult I am glad that I was brave enough to dip my feet into the darkness.  I feel like I have to catch up to all the years of not partaking in the “diabolical” festivities. Last year I  watched my son walk at his first Halloween parade at school. His class even put on a musical number. He sang his little heart out while he flexed his Hulk muscles to all his friends. It was fantastic.

I was guilt-ridden by religion fanatics for so many years.  Every little thing was seen as a sin and it guaranteed you a one way ticket to Satan’s bubbly cauldron in hell.  I think that if you live a life of helping others and contribute to society you really have nothing to worry about.  I now have what I call freedom from religion. My mother, on the other hand, still locks her door and hides inside from trick-or-treaters. She’s come a long way from the days she used to pad lock the front gate and display a sign outside stating that we didn’t celebrate Halloween (embarrassing). I guess you can say she is getting better.

3 thoughts on “I know it’s not Halloween but….”